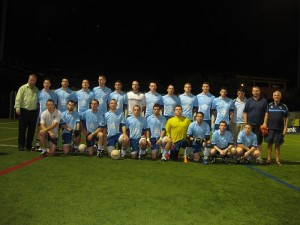 Not only has it been a great year for Dublin GAA at home, it has also been a tremendous year for Dublin GFC in New York as last month’s win in the New York Intermediate Championship Final sees the NY Dub’s playing senior for the very first time since the club’s reformation back in the 1990s.

NY Dublin was originally founded back in the 1930s but a lean period in the late 80s put things on hold, however, the club was resurrected in 1995 and ever since has been going from strength to strength.

As part of GaelicSportsCast profile series of New York GAA clubs, we take our first look at the grassroots GAA scene in the Big Apple by exploring the history of the NY Dublin Gaelic Football Club with reformed founder member, Niall Rice, and treasurer, Jimmy Campbell.