#271 The Phoenix Gaels footballers in the Sonora Desert 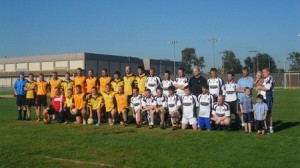 Picture of the Phoenix Gaels (in white) and the LA Wild Geese (yellow) before a recent game. (Photo courtesy of Phoenix Gaels).

While the All Ireland Hurling Final takes center stage in Ireland this week, North America too will be attracting followers of Gaelic sports as the annual US National Finals are set to begin on Friday, Sept 2-4 at Treasure Island, San Francisco.

Clubs from all across America and even Canada will be making their way to the Golden State in search of honours this weekend and in the lead up to the start of competition, GaelicSportsCast profiles some of the various clubs in action.

Today we focus on Junior D Football hopefuls, the Phoenix Gaels from Arizona.
The ‘Gaels have been going about their business quietly in the south west and are growing both football and of late hurling in the region – the latter with help from LA.

To tell us all about this club, who have to overcome the challenges of the Sonoran Desert climate, is Phoenix Gaels Chairman, Jason Ryan.