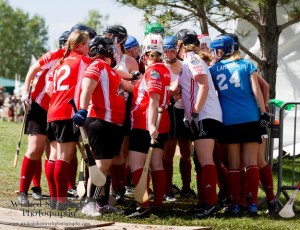 The Rogue Camogs huddle prior to a game last weekend at the Colorado Irish Festival where for the first time the festival hosted a camogie match! (Photo by Amanda Renee of Wicked Shamrock Photography).

If there are Gaelic sports clubs out there who at times struggle to make a far-off tournament because of costs and other commitments, well take heart as a group of American camogie players from three different cities came up with a way of beating the odds when forming a new  team –  The Rogue Camogs!

Camogie in Denver, Seattle and Twin Cities, Minnesota had a similar problem: the numbers were there but not everyone was in a position to attend the North American GAA Nationals in Chicago last summer, so uniting together they found a solution.

They’ll be heading again this year to the ‘Nationals at San Francisco in September and here to talk about how the Rogue Camogs was born and how they manage a team, are members – Kyle Shane (Denver Camogie Manager), Sarah McFarland (Twin Cities Manager) and Kim Beckett (Seattle Manager).