#244 'Cusacks on the double in Sydney 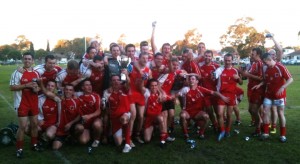 Though coming up short in the ladies football and camogie league finals, it turned out to be a fantastic weekend for Michael Cusacks as last Sunday at Mono Park in Sydney, the club took the double when winning this year’s NSW GAA men’s football and hurling league titles.

In a repeat of last years men’s football final, this time around Michael Cusacks came out on the winning side over Cormac McAnallens on a scoreline of [16] 0-16 to [12] 2-06.

In the hurling, ‘Cusacks made up for the dissapointment in losing both the league and championship deciders last year when comprehensively accounting for Central Coast by [40] to 5-25 to [17] 1-14.

Here to tell us about the league finals is Michael Cusacks PRO, Jamie Fitzsimmons.