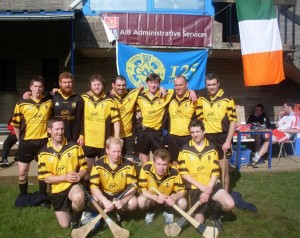 Holland’s, Den Haag hurling team, took their second competition of the season over the weekend when winning the 2nd Round of this year’s European Hurling Championship at the new location for hurling in Europe – Budapest, Hungary.

Despite hosts Budapest, coming in 4th of four teams in action on Saturday, the recently formed hurling team – they also have a football team – will be very happy to have brought the sport for the first to the Hungarian capital where already some locals have fallen in love with the ancient game.

In a repeat of the previous round, Den Haag and Zurich once more reached the final with the Dutch side again coming out on top. Last year’s champions, Belgium, struggling to find form, came in 3rd position when accounting for Budapest.

Meanwhile, in the Camogie final, Belgium again took the honours when beating Zurich.

Here to tell us about the weekend’s tournament is Den Haag GAA Chairman, Mathew Morris.