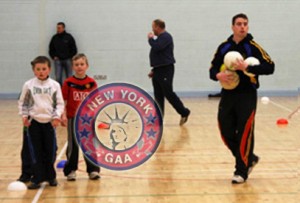 New York GAA’s Games Development Officer (GDO), Simon Gillespie, who was appointed last year, is relishing his role introducing Gaelic sports to new audiences in the Big Apple.
His energy and passion for Gaelic sports combined with his coaching and administrative expertise has already made an impact developing coaching structures in existing city clubs.
In this first in a series of interviews with GDO’s across America, GaelicSportsCast talks to Simon, a Donegal native, about his role both at underage and club level in the Big Apple.