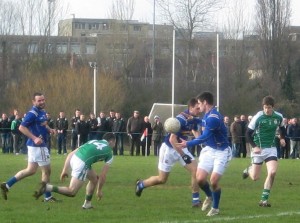 After a bright enough start to the Division 4 Allianz League for London footballers, things have gone downhill in recent weeks.
Last weekend in Greenford, London took on Longford and after a good opening performance there was much to be hopeful about as the home side only trailed Longford by three points at half time. However, things turned rather bleak for the Metropolitans in the second half as the visitors upped a gear and unfortunately London was not able to follow suit and disappointingly fell to a large defeat.
Taking on Clare in Cusack Park today, Sat March 12 was always going to be difficult and again London suffered a heavy loss on a scoreline of Clare [25] 5-10 to London’s [4] 0-04.
The hurlers meantime are faring better in their league campaign and take on Kildare tomorrow in Newbridge, County Kildare. A crucial match that could decide London efforts to reach this year’s Division 3A final.
Going into last weekend’s game against Wicklow in Ruislip, unbeaten London topped the table but somehow, after putting in a storming first half display, lost concentration in the second period and fell to a one point defeat [18] 1-15 to [17 [1-14].
Looking back on last weeks games and discussing the hurlers hopes Sunday, is London GAA Chairman, Tommy Harrell.