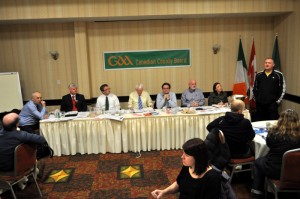 With some 5000 working visas expected to be issued to Irish immigrants to Canada this year, it’s no great surprise that accommodating the influx of potentially new Gaelic sports players was high on the agenda at the recent Canada GAA AGM.
The convention was held at the end of February in Ajax, Ontario, with delagates from the five provinces representing 16 clubs across 11 cities throughout this vast country.
Chairman Brian Farmer (Durham Robert Emmets) was returned as was Vice-Chairman Jarlath Connaughton (Ottawa – Gaels); Treasurer Eddie Mangan (Durham Robert Emmets); Secretary John O’Flynn (Vancouver – ISSC), and Development Officer Lorraine Morley (Toronto-Michael Cusacks Ladies GFC).

The delegates heard of a new hurling club being formed, Toronto HC but chief among the many issues brought up at convention was the number of sanctioned players allowed with any club for the season.
Here to tell us about that debate and relate the present state of Canadian GAA is re-elected secretary, John O’Flynn.