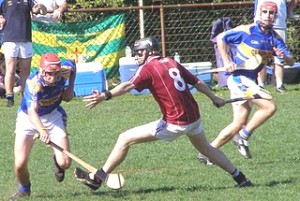 The Boston Northeast Division Championships drew to a close over the weekend with easy victories for the winners of both the senior football and senior hurling championships. In men’s senior football, the final saw old rivals Donegal and Aidan McAnespies battling it out for the top prize in regional football. The game failed to catch fire as a contest for Donegal took a hold on proceedings early in the match before going on to record a deserved 8 point margin of victory. In senior hurling, defending champions Tipperary proved far too strong for Galway and never looked in trouble running out emphatic 10 point winners.  Shannon Blues took the intermediate football crown when beating Kerry while in the two best games of the weekend, Aidan McAnespies edged Donegal by a point in the Junior A Football final while in the corresponding hurling final, Fr Tom Bukes with a late goal snatched victory from Tipp. Here to tell us about the Boston finals is reporter, Rory O’Donnell.