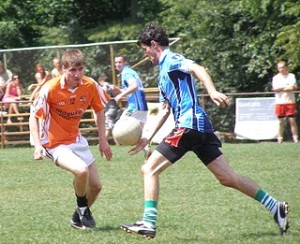 We had some thrilling football action as well as a big surprise in the hurling in the Northeast GAA Championships over the weekend at Canton, MA. In senior football, Wolfe Tones heading the table, crossed swords with Armagh Notre Dame who needed a result to keep their hopes of adding senior honours to their Intermediate crown of last year. In a fascinating contest that ebbed one way then another, Armagh ND grabbed a late point to secure a merited draw in a game that both sides could have won and lost. In the other big football clash yesterday, another nailbiter saw Aidan McAnespies and ’09 champs St Christopher’s battle to another draw on a scoreline 1-14 (17) each. In senior hurling, championship leaders Tipp had a comprehensive win over Galway, however, Cork pulled off the shock of the weekend, if not the season, when beating last year’s runners up and NACB champions, Wexford.
To tell us all about the weekend’s action is Boston GAA reporter, Rory O’Donnell.