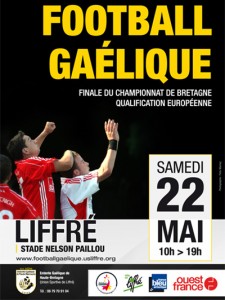 We had Rd 2 of the North West Regional Championships of Europe as well as the final of the Breton Championships in mens football take place in Liffré, France yesterday, Saturday May 22. The host club and all French side Liffré, who despite losing in the final of the tournament, did enough to win their fourth successive title in the Breton Championships. Their opponents in this North West tournament decider, Guernsey, who had lost in the final in Brest back in April, this time came out winners on a scoreline of 2-8 (14) to Liffré 1-3 (6).
Paris Gaels referee and Dublin native Michael Cryan who officiated yesterday along with French referee and Liffré Club President, Philippe Cornilleau, spoke to GaelicSportCast about the tournament.