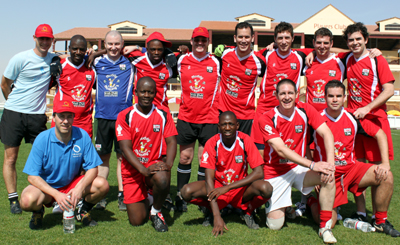 Zimbabwe and Singapore joined forces recently at the Gulf Games in Dubai when playing as 'Singbabwe'. They acquitted themsleves vey well in reaching the Shield Semi Final.

Over the past few months, the continent of Africa has been introduced to the world of Gaelic Games as a fledgling Gaelic football team has started up in southern Africa in Harare the capital of the country of Zimbabwe.  English native Paul Carpenter, who converted to Gaelic football five years ago while playing with the Singapore Lions GAA Club, decided the time was ripe to start a club in the region. With just a few weeks to prepare in preparation for the recent Seven’s Gulf Gaelic Games in Dubai, he brought an enthusiastic core group together many of whom took to Gaelic like ‘ducks to water’. Paul spoke to GaelicSportsCast about how it all began.