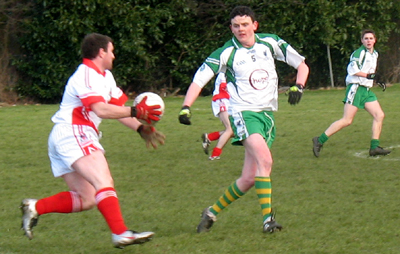 Napier' on the attack in the final.

After filling the runners-up spot for the past three years, Edinburgh Napier University’s perseverance paid of this year when last weekend they beat Liverpool Hope University to take the British Universities Men’s Gaelic Football Championship. Held in Birmingham on Saturday and Sunday last, Napier’ had three points to spare in the final, while in Division 2, it was another win for Scotland as University of Edinburgh took the honours, while the impressive University of East London took the Plate. GaelicSportsCast spoke to Chairman of British Universities GAA, Peter Mossey about the tournament and the growing Gaelic Games scene on campuses across the UK.