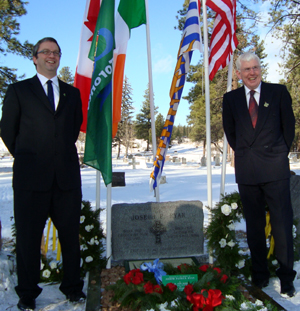 Secretary John O'Flynn (left) and Chairman Brian Farmer of Canada GAA at the grave of one of the founders of the GAA, Joseph P. Ryan, who is buried in Cranbrook, British Columbia CANADA during the 125th Anniversary Celebrations, December 19, 2009.

As Vancouver gets ready this evening to open the Winter Olympics, GaelicSportsCast sampled the atmosphere late Wednesday night when talking over Skype to Canada GAA Secretary, John O’Flynn about the recent influx of Irish migrants to Canada and what it might mean for GAA clubs across this vast northern land. Mr O’Flynn also spoke about the hopes and aspirations of the Canadian County Board.