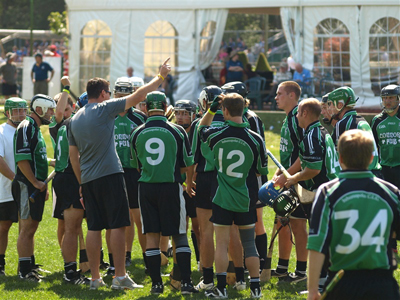 One of Indy Hurling Club teams takes a break at the North American Playoffs last September in Canton, Boston.

An Irish American wedding, a couple of hurls, a sliothar, a puck-around….next thing you know they’re  talking about forming a hurling club in a city crazy for all things motor car racing. Indianapolis is a city that hasn’t attracted a huge a number of Irish immigrants, yet somehow what started as some fun after a wedding turned into a thriving and growing hurling club made  up of  mostly American players. Recounting the club’s progress and detailing the rookie hurlers efforts to learn the game is club Chairperson, American born Brian Mathes and their coach Kilkenny man, Ciaran Connery.